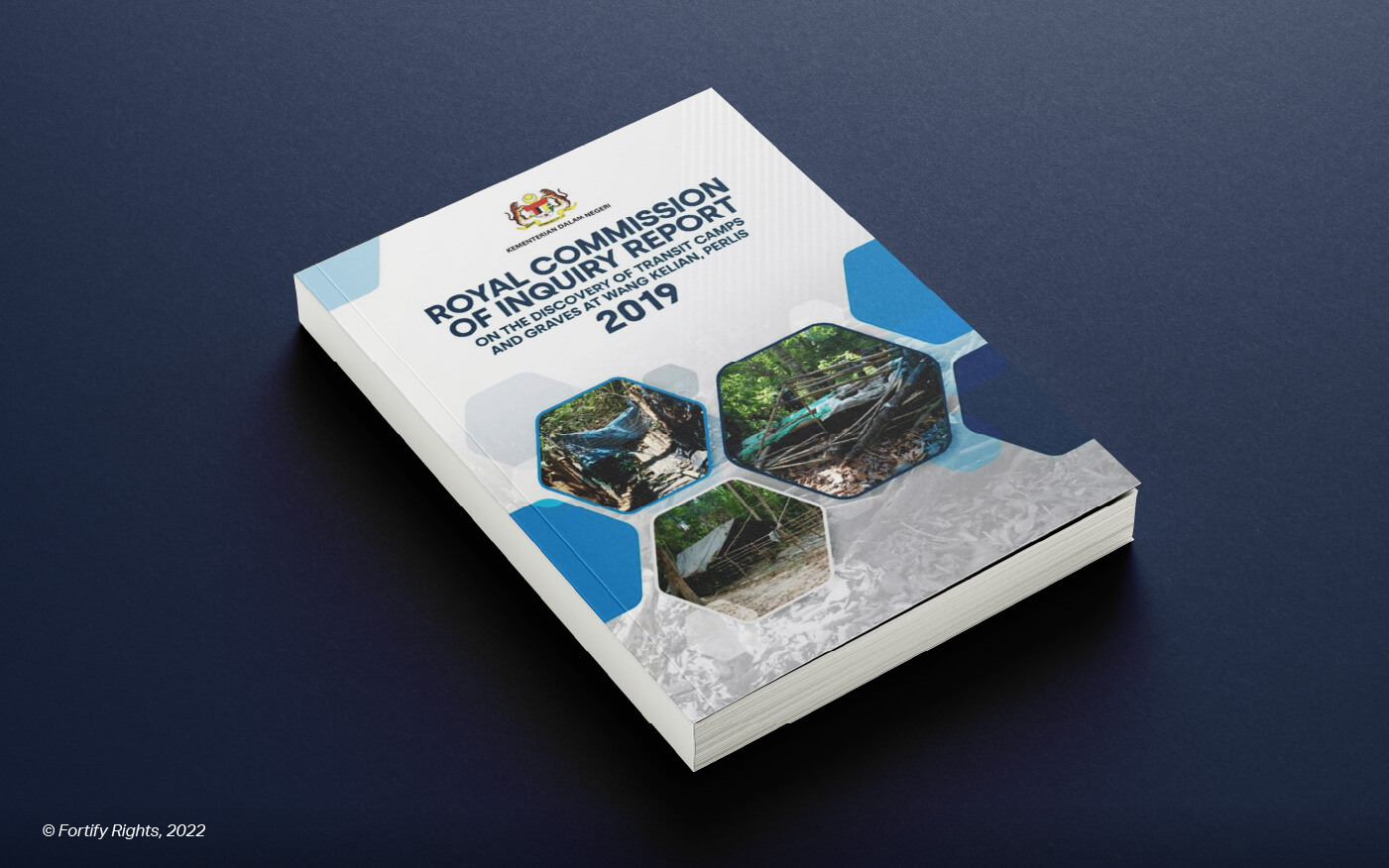 (KUALA LUMPUR, October 18, 2022)—Malaysian authorities should prosecute officials involved in trafficking Rohingya refugees to “death camps” in Wang Kelian, including those who were criminally negligent in the police investigation, said Fortify Rights today. The Malaysian government failed to publicly release the final report of a 2019 Royal Commission of Inquiry (RCI) into mass graves and trafficking camps discovered in 2015 in Malaysia, with the chair of the RCI claiming that the report is a state secret. However, the report recently appeared on the Ministry of Home Affairs website and is now on file with Fortify Rights.

“The unceremonious appearance of the report online, unbeknownst to key stakeholders in the country, raises questions about the ongoing lack of justice and accountability for Rohingya victims of trafficking,” said Matthew Smith, CEO at Fortify Rights. “In response to the RCI’s findings, and to give Rohingya victims and their families a measure of justice, the Malaysian government must provide reparations and prosecute officials implicated in the horrendous crimes in Wang Kelian.”

The RCI report finds that officials could have prevented the torture and death of Rohingya and Bangladeshi trafficking victims and that official negligence hindered the detection and proper investigation of a human trafficking syndicate responsible for atrocity crimes against Rohingya and others.

Fortify Rights communicated with two members of the Malaysian Parliament, a former member of the national human rights commission SUHAKAM, and an international NGO leader about the appearance of the RCI’s final report online—none were aware the report had been posted online, adding to the confusion and lack of transparency around its publication and findings more than three years after the RCI submitted its report to the government.

On January 27, 2019, the Government of Malaysia announced the creation of the seven-member RCI—the country’s highest form of an appointed investigative body—headed by former Malaysian Chief Justice Arifin Zakaria and including former Inspector-General of Police Norian Mai and other former government and elected officials. Tasked with investigating and ensuring accountability for the human trafficking and graves discovered in Wang Kelian, the government gave the commission six months to submit its final report and recommendations.

Over the course of the investigation, the RCI called 48 witnesses, including police officers, forensic experts, and Rohingya survivors. Fortify Rights and SUHAKAM also shared evidence with the commission from a joint investigation into the trafficking of Rohingya from Myanmar and Bangladesh.

More than three months after it submitted its final report, in January 2020, then Prime Minister Muhyiddin Yassin announced, “The Ministry [of Home Affairs] will present the report to the Cabinet next week, and if the Cabinet agrees, we will allow the report to be made public.”

Following this, no further public announcements were made about the report until July 19, 2022, when Minister of Home Affairs Hamzah bin Zainudin stated in response to a parliamentary question lodged by Lim Lip Eng that the Cabinet had approved the RCI report in June 2020. On August 5, 2022, however, the Chair of the RCI, Arifin Zakaria, told the media that the report was confidential and subject to Malaysia’s Official Secrets Act.

“The only secrets surrounding this report relate to official complicity in the trafficking camps, and the next steps should involve prosecutions,” said Matthew Smith. “The authorities must not lose sight of the fact that significant numbers of Rohingya were murdered as well as bought and sold for profit on Malaysian soil. The Royal Commission of Inquiry was meant to advance justice and accountability, not end the conversation or sweep these crimes under the rug.”

In its 211-page report, the RCI found that the torture and deaths of Rohingya refugees and others in Wang Kelian “should have been prevented by the authorities” and that Malaysian enforcement agencies failed to follow their own standard operating procedures, significantly impacting the quality of their investigation into the situation in Wang Kelian.

The report notes that after the discovery of the trafficking “death camps” by Malaysian authorities on January 19, 2015, the authorities only took action on March 6, 2015, to verify whether there were human remains in the structures resembling graves. It took another several months for the authorities to initiate a full forensic exhumation of the graves and autopsy of the victims, which was initiated on May 24, 2015.

The report explains the delay as resulting from orders to “put on hold” any investigation of the graves issued by Zul Aznam bin Haron, the Perlis State chief of police. Zul Aznam bin Haron claimed to the RCI that he was acting on orders from then Inspector-General of Police Khalid bin Abu Bakar. When challenged by the RCI, Khalid bin Abu Bakar claimed that he had issued the order to delay the investigation for more than four months as he was “unsure as to whether the location of the camps discovered were in Malaysia or Thailand.”

The question about whether the trafficking camps were in Malaysian or Thai territory should have prompted an immediate investigation, not a delay, said Fortify Rights.

As a result of the delay, forensic experts could only establish causes of death for two of the 114 exhumed victims, inhibiting accountability. A forensic expert involved in the case and interviewed by the RCI noted that if autopsies had been carried out earlier, he was “sure that there would have been a difference in terms of determination of identities and causes of death of the corpses.”

The RCI report also notes severe deficiencies in intelligence-gathering, cross-border coordination, and the handling of human remains and other pieces of evidence. Despite the failings and serious negligence identified by the RCI, the report fails to recommend legal action against implicated officials nor a fuller investigation of potential official complicity in the human trafficking syndicate responsible for the atrocities in Wang Kelian.

A full investigation and legal action must now be taken against Malaysian officials identified as potentially having obstructed justice in their negligent handling of the investigation into the abuse and murder of trafficking victims in Wang Kelian, said Fortify Rights.

Between 2012 and 2015, it is estimated that more than 170,000 men, women, and children boarded ships from Myanmar and Bangladesh bound for Malaysia via southern Thailand. Most of those who boarded these ships were Rohingya refugees fleeing systematic persecution and genocide in Myanmar.

On April 21, 2015, Fortify Rights testified before the U.S. Congress on the human trafficking of Rohingya to Thailand and Malaysia, exposing the existence of illicit trafficking camps in the border areas. Nine days later, on April 30, 2015, Thai authorities announced the discovery of trafficking camps and a mass grave near the Malaysian border. The grave contained more than 30 bodies of suspected victims of human trafficking believed to be Rohingya Muslims and Bangladeshi nationals.

On May 25, 2015, the Malaysian police announced the discovery of 139 graves and 28 suspected human-trafficking camps just over the border from Thailand in Wang Kelian, Perlis State, Malaysia.

Drawing on a multi-year investigation and more than 270 accounts from survivors and other eyewitnesses, a 121-page report by Fortify Rights and SUHAKAM published in 2019 documents grave human rights violations perpetrated against Rohingya trafficked from Myanmar and Bangladesh to Malaysia from 2012 to 2015. The abuses Fortify Rights and SUHAKAM uncovered include imprisonment, torture, extortion, death by deprivation, rape, and killings on land and at sea. The report also found that Malaysian authorities obstructed justice by destroying evidence and delaying the exhumation of victims’ bodies, which are facts backed up by the RCI report findings.

Despite these revelations, since 2015, Malaysian courts have convicted only five individuals, four of whom are non-Malaysians, for offenses connected to the discoveries in Wang Kelian. No officials have been prosecuted in connection with the crimes.

By contrast, in 2019, Thai authorities initiated the largest human-trafficking trial in the nation’s history, eventually convicting 76 defendants, including nine officials, for crimes related to the trafficking of Rohingyas and Bangladeshis to Malaysia via Thailand.

For the second consecutive year, the annual Trafficking in Persons (TIP) report by the U.S. State Department kept Malaysia on the lowest tier of its three-tier ranking in terms of efforts to prevent, end, and remedy human trafficking. The 2022 TIP report notes, “The Government of Malaysia does not fully meet the minimum standards for the elimination of trafficking and is not making significant efforts to do so.” The TIP report also notes that Malaysian authorities “did not report initiating any new prosecutions or convictions of government employees allegedly complicit in trafficking crimes. Although law enforcement agencies continued to arrest officials for complicity in trafficking, insufficient evidence collection hindered bringing these officials to justice.”

In 2009, Malaysia acceded to the United Nations Convention against Transnational Organized Crime (UNTOC) and its Protocol to Prevent, Suppress and Punish Trafficking in Persons, Especially Women and Children. By acceding to the UNTOC and its protocol, Malaysia agreed to create mechanisms to prosecute human trafficking, enable investigation of incidents of human trafficking occurring in a transnational context, and support victims. In particular, the UNTOC and its protocol provide that victims should have access to protection from threats, retaliation, and intimidation and should receive compensation and rehabilitation. The Protocol also provides for effective victim participation in criminal justice proceedings. Additionally, as a state party, Malaysia is obligated to take steps to assist with the physical, psychological, and social recovery of trafficking victims through appropriate housing, legal awareness, medical assistance, material assistance, psychological assistance, and livelihood opportunities.

In 2007, Malaysia passed the Anti-Trafficking in Persons and Smuggling of Migrants Act, which criminalizes human trafficking and details the investigative duties of enforcement officers.

Under Section 201 of the Malaysian Penal Code, “causing the disappearance of an offence committed or giving false information, to screen the offender” is punishable by imprisonment and a fine. Section 217 also prescribes imprisonment and fines to public servants disobeying a direction of law with the intent to save another person from punishment. Similarly, Section 218 prescribes imprisonment and fines where public servants issue intentionally incorrect or misleading reports to save another person from punishment.

Finally, the Public Officers (Conduct and Discipline) regulation of 1993 regulates misconduct of public servants, including negligence in performing duties and conducting themselves in a manner bringing a public service into disrepute.

Malaysian officials who mishandled the Wang Kelian case displayed negligence in their duties and, more importantly, continued to deny justice to the trafficking victims and their relatives through their actions, said Fortify Rights.

“The fact that Malaysia still hasn’t held any officials accountable is a stain on the nation’s record that must be rectified,” said Matthew Smith. “The trafficking of Rohingya to Malaysia was widespread and systematic and demands justice, accountability, and reparations for victims and their families.”