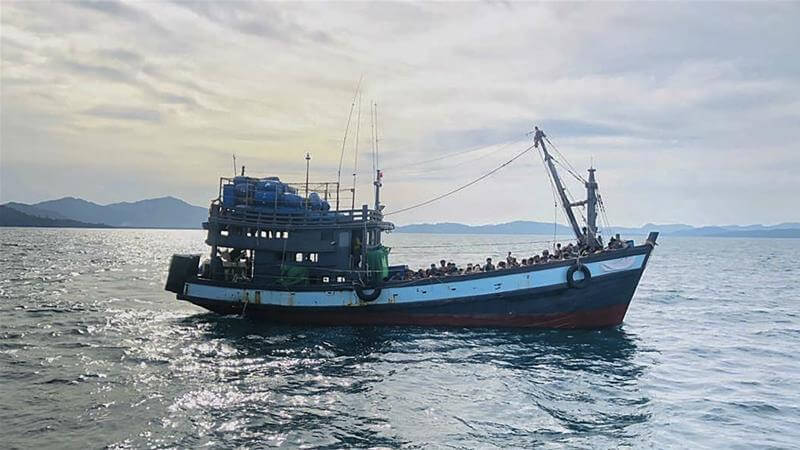 Boat of more than 200 Rohingya refugees intercepted by Malaysian authorities

(BANGKOK, April 10, 2020)—The Government of Malaysia should release detained refugees and prevent the arbitrary detention of new arrivals to minimize health risks due to COVID-19, said Fortify Rights today. On April 5, Malaysian authorities intercepted a boat carrying 202 Rohingya, including 45 women and five children, off the northwestern coast of Langkawi island in Malaysia’s Kedah State.

“Malaysia should take extra precautions now to protect the rights of refugees and refrain from detaining them,” said Matthew Smith, Chief Executive Officer of Fortify Rights. “Detaining refugees after they pass a quarantine and during a pandemic would be irresponsible and inhumane.”

In light of the COVID-19 pandemic, Malaysian Defense Minister Ismail Sabri Yaakob recently told media that the authorities are quarantining the 202 Rohingya refugees for a two-week period at a location in Langkawi, saying: “Because they are already in our waters, it becomes our responsibility to take care of their interests.”

On April 6, the Langkawi District Department health team reportedly conducted a health screening of the new arrivals and found that none of the refugees had coronavirus symptoms. It is unclear what steps Malaysian authorities will take with regard to the newly arrived refugees following the period of quarantine; however, Malaysia routinely detains refugees and survivors of trafficking in 14 poorly equipped immigration detention facilities located throughout the country.

On March 23, the Malaysian Ministry of Health said that COVID-19 tests would be free of charge for both foreigners and Malaysians. As of April 9, the Malaysian government confirmed more than 4,200 cases of COVID-19 infections and reported 67 deaths from the virus. A government-issued movement-control order instructing people to stay at home and not travel is in effect in Malaysia until at least April 14.

Rohingya refugees have been trafficked to Malaysia from Myanmar and Bangladesh for several years. In March 2019, the National Human Rights Commission of Malaysia (SUHAKAM) and Fortify Rights jointly published a 121-page report, “Sold Like Fish,” based on a multi-year investigation into mass graves and the trafficking of Rohingya from Myanmar and Bangladesh to Malaysia from 2012 to 2015.

On April 9, the Office of the United Nations High Commissioner for Human Rights called for governments in the Asia Pacific to “immediately release vulnerable migrants currently confined in immigration detention centers, notably children and their families.”

Customary international law as well as Article 9 of the International Covenant on Civil and Political Rights, to which Malaysia is a State party, protects the right to liberty, which forbids arbitrary, unlawful, or indefinite detention, including of non-nationals. Refugees and children should never be detained based on their immigration status alone.

As of February 2020, more than 178,900 refugees, including more than 100,000 Rohingya, are registered with the United Nations High Commissioner for Refugees in Malaysia—the U.N. agency mandated to protect refugees. The total number of refugees in Malaysia is likely much higher.

The Government of Malaysia should ratify the 1951 Refugee Convention and its 1967 Protocol and develop a domestic legal framework to regulate the status and protection of refugees, said Fortify Rights today.

Rohingya continue to face genocide and other international crimes in Myanmar, and migration routes available to them remain deadly. In February 2020, at least 15 Rohingya from refugee camps in Cox’s Bazar District, Bangladesh reportedly drowned in the Bay of Bengal after their boat, carrying more than 100 Rohingya, capsized en route to Malaysia.

There are more than one million Rohingya refugees in overcrowded camps in Bangladesh and more than 120,000 confined to more than 20 internment camps in Myanmar, and many fear an outbreak of COVID-19.

Ongoing restrictions imposed by the Government of Bangladesh on Rohingya access to the internet and mobile-phone communications as well as the construction of fencing around the camps in Cox’s Bazar District threaten the rights of Rohingya refugees, including rights to health, access to information, and freedom of movement. These restrictions also increase public health risks and the potential of COVID-19 transmissions.

“It’s in everyone’s interest for governments in the region, including Malaysia and Bangladesh, to coordinate to improve protections for refugees and prevent the spread of COVID-19,” said Matthew Smith. “It’s imperative that governments consider how this pandemic is affecting the least advantaged and that they end their policies of detaining refugees and migrants.”