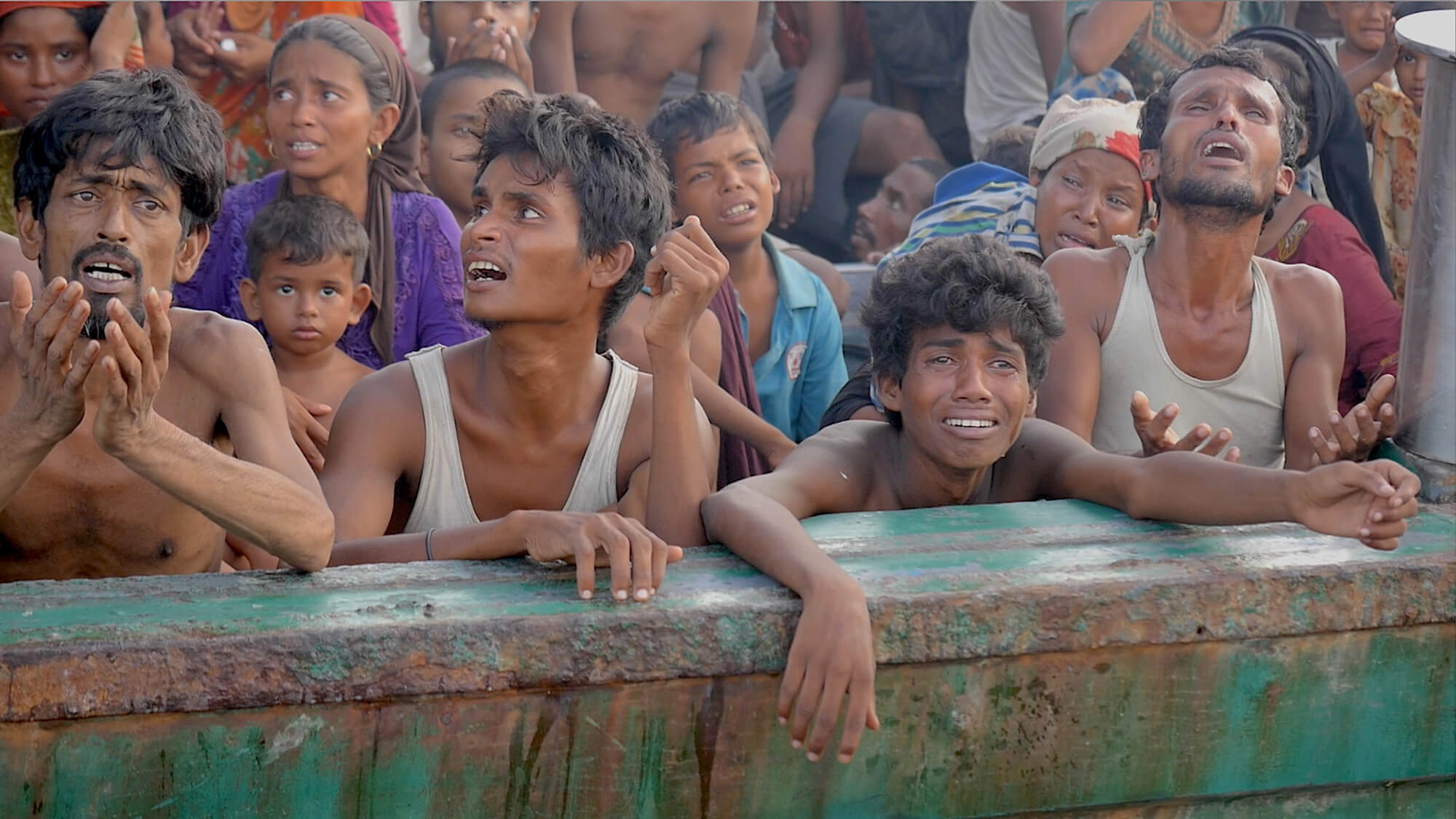 (KUALA LUMPUR, March 27, 2019)—In a new joint report released today, the Human Rights Commission of Malaysia (SUHAKAM) and Fortify Rights find reasonable grounds to believe that a human-trafficking syndicate committed crimes against humanity in Malaysia and Thailand against Rohingya men, women, and children from 2012 to 2015.

“The victims of these crimes and their families suffered tremendously, and these horrific crimes should never happen again in Malaysia and anywhere else for that matter,” said SUHAKAM Commissioner Jerald Joseph. “This report provides new evidence that we hope will help ensure justice for victims, accountability for perpetrators, and policy changes to strengthen the Malaysian and regional response to human trafficking.”

The report, entitled “Sold Like Fish,” is based on a multi-year joint investigation including more than 270 interviews with eyewitnesses, survivors, human traffickers, government officials, and others from 2013 to 2019. It documents the crimes of human traffickers against Rohingya refugee women, men, and children at sea and in human-trafficking camps in Malaysia and Thailand.

The report documents how Malaysian authorities destroyed the human-trafficking campsite in Wang Kelian the day after it was discovered, potentially diminishing evidence that could have aided a police investigation. Malaysian authorities ordered a forensic team to exhume bodies in May 2015, more than four months after the gravesite was first discovered, without accounting for the delay. The authorities did not publicly reveal information about the site until May 25, 2015. The four-month delay in exhuming bodies delayed post-mortem examinations and, in turn, hampered forensic specialists from identifying the cause of death of exhumed remains.

These and other factors may constitute obstruction of justice, said SUHAKAM and Fortify Rights.

From 2012 to 2015, more than 170,000 people boarded ships from Myanmar and Bangladesh bound for Malaysia and Thailand. The majority of people trafficked during this period were Rohingya Muslims; however, in late 2014 and 2015, traffickers began to target Bangladeshi nationals as well. The joint report focuses on crimes committed against Rohingya refugees from 2012 to 2015.

The report documents how a criminal syndicate—a group of individuals or organizations working together for common criminal-interests—deceived Rohingya refugees to board ships bound for Thailand and Malaysia and then abused them. Traffickers piled hundreds and thousands of Rohingya refugees into repurposed fishing vessels and deprived them of adequate food, water, and space, committing torture and, in some cases, rape at sea. Traffickers murdered captives, and many died by suicide at sea.

The report documents how, once onshore, members of the syndicate held victims in conditions of enslavement in remote camps along the Malaysia-Thailand border, including in Wang Kelian, demanding upwards of US$2,000 (6,800 Malaysian Ringgit at the time) for their release. Traffickers denied their captives access to adequate food, water, and space, resulting in deaths, illness, and injury, including paralysis, particularly of those unable to pay money.

“When I was unable to pay the money to the men, they poured boiling water on my head and body,” said “Rahim Ullah,” a Rohingya Muslim who was 16-years old when traffickers tortured him in a camp on the Malaysia-Thailand border in 2014.

The report also documents how perpetrators murdered or caused the death of captives and buried bodies in mass graves and, in some cases, forced captives to bury bodies.

Traffickers also systematically sold untold numbers of Rohingya women and girls into forced marriages and situations of domestic servitude in Malaysia, according to the report.

“For years, this was a calculated business and attack on the Rohingya community,” said Matthew Smith, Chief Executive Officer of Fortify Rights. “The massive scale and horrific severity of these operations were never properly documented or fully prosecuted. This new evidence demonstrates the need for accountability.”

On April 30, 2015, Thailand authorities announced they discovered more than 30 bodies in a mass grave in a makeshift camp near the Malaysian border, believed to be Rohingya and Bangladeshi victims of human trafficking. On May 25, 2015, the Royal Malaysian Police announced the discovery of 139 graves and 28 suspected human-trafficking camps in Wang Kelian, Perlis State, Malaysia.

In 2017, Thailand convicted 62 defendants, including nine Thai government officials, for crimes related to the trafficking of Rohingya and Bangladeshis to Malaysia via Thailand.

Since 2015, Malaysian courts convicted only four non-Malaysian persons of trafficking-related offenses connected to the mass graves discovered at Wang Kelian.

“Previous efforts to uncover the truth only scratched the surface,” said Matthew Smith. “The loss of life during this three-year period was massive. The Royal Commission of Inquiry is a step in the right direction to hold perpetrators accountable and ensure appropriate reparations for those affected.”

Eyewitness testimonies in the report expand upon information established in human-trafficking trials in Thailand and indicate the complicity or, in some cases, direct involvement of government authorities in the transnational trade of Rohingya refugees.

Numerous survivors reported that Thai authorities extrajudicially transferred or sold them from state custody to members of a transnational human-trafficking syndicate, in some cases, directly transporting Rohingya to human-trafficking camps on the Malaysia-Thailand border or into Malaysian territory. The report includes details into government complicity and involvement beyond the evidence exposed in the 2017 conclusions of Thailand’s mass human-trafficking trial.

Further investigation is required to determine the extent of responsibility and involvement of Malaysian authorities in the trafficking of Rohingya and Bangladeshis from 2012 to 2015, said SUHAKAM and Fortify Rights.

“Sold Like Fish” evaluates the criminal dimensions of the violence against Rohingya at sea and in Malaysia and Thailand under the Rome Statute of the International Criminal Court (ICC)—which the Government of Malaysia acceded to on March 4, 2019—as well as international jurisprudence.

Under Article 7 of the Rome Statute, a crime against humanity is committed when one or more prohibited criminal acts are “committed as a part of a widespread or systematic attack directed against any civilian population, with knowledge of the attack.” An “attack” in the context of crimes against humanity need not involve armed conflict and can occur during peacetime.

In their investigation, SUHAKAM and Fortify Rights found reasonable grounds to believe that a transnational criminal syndicate committed murder, extermination, enslavement, deportation or forcible transfer, imprisonment, torture, and rape, as part of a widespread and systematic attack directed against Rohingya civilians from Myanmar, and they did so with knowledge of the widespread and systematic attack underway.

Survivors of these attacks in Malaysia deserve protection under Malaysian law as survivors of human trafficking, and, in the case of Rohingya, protection as refugees, said SUHAKAM and Fortify Rights.

The report encourages the Royal Commission of Inquiry to establish the facts and circumstances surrounding the human trafficking, deaths, mass graves, and law enforcement response to the mass graves at Wang Kelian and human trafficking of men, women, and children to Malaysia from 2012 to 2015.

Malaysia should hold to account all those responsible for committing crimes against humanity through fair and impartial trials conducted in line with international human rights law, the organizations said.

In July 2018, Fortify Rights documented how Myanmar authorities made “extensive and systematic” preparations for attacks against Rohingya Muslims that constituted the crime of genocide. The government of Myanmar continues to deny any wrongdoing.

“There’s fresh political will in Malaysia to right these wrongs and ensure justice and accountability for Rohingya and all victims of these heinous crimes,” said Jerald Joseph. “The international community should do everything in its power to address the root causes of this crisis in Myanmar.”