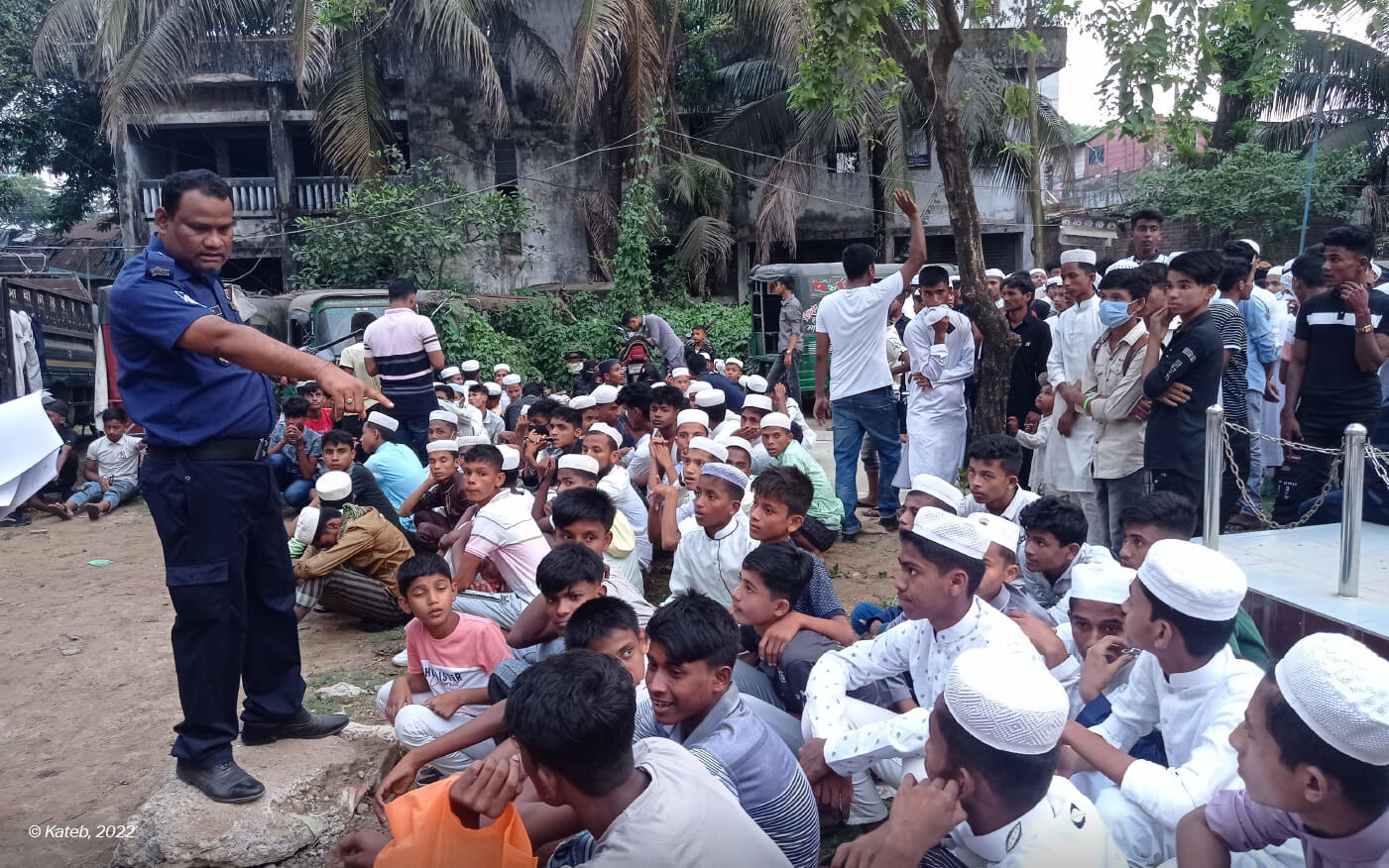 (BANGKOK, May 26, 2022)—The Bangladesh government should investigate and hold accountable police involved in beating and committing other abuses against Rohingya refugees, including children, in the Cox’s Bazar District refugee camps, said Fortify Rights today. During the Ramadan holiday in April and May 2022, Bangladesh police tightened travel restrictions, relying on abusive tactics to confine Rohingya refugees to the camp.

“There is no justification for confining refugees to camps, let alone enforcing such unlawful restrictions through beatings,” said Amy Smith, Executive Director at Fortify Rights. “These beatings, not only of children but also during the holy month of Ramadan, are particularly shameful. The Bangladesh authorities should put an end to these abuses and hold those responsible to account.”

Bangladesh police spokesperson Rafiqul Islam acknowledged increased restrictions on Rohingya refugees and the reported temporary detention of a group of more than 450 Rohingya on May 4 and 5 during Eid-al-Fitr–the end of Ramadan-justifying the police actions as “security” measures. Speaking to Agence France-Presse, he said: “Rohingyas are involved in various crimes. It is unsafe for our tourists. We have strengthened the security of the city. As tourists visit Cox’s Bazar on Eid al-Fitr, we have stepped up patrols to keep them safe.”

In April and May 2022, Fortify Rights interviewed ten Rohingya refugees and reviewed videos taken by Rohingya refugees in Cox’s Bazar District, providing evidence of abuse by Bangladesh police. Seven of the ten Rohingya refugees specifically mentioned the Armed Police Battalion (APBn)–a specialized unit of the police operational in the refugee camps—as being involved in the abuse, while others referenced police generally.

“Two days back, one of my children went [to Kutupalong market], and [the police] broke his leg by beating him,” a 30-year-old Rohingya man originally from Maungdaw Township in northern Rakhine (Arakan) State told Fortify Rights. He said:

Fortify Rights interviewed a Rohingya man who witnessed the 11-year-old child getting beaten by the APBn. He said: “I saw the police beat the child. It was on April 9, [2022], and the child was beaten at about 11:30 a.m. at the checkpoint at the entrance of Kutupalong Camp-1 . . . [T]hey are known as the APBn police.”

He went to describe the incident, saying:

“The child could not walk like a normal person after he got beaten,” the eyewitness said. “He was wearing trousers . . . and the trousers were torn when he fell. I saw he was bleeding on the knee where his trousers ripped . . . He was chased by a policeman.”

A Rohingya mother of an eight-year-old boy told Fortify Rights of a similar incident happening to her son, saying, “My son was beaten.” Describing what happened on April 9, 2022 at a checkpoint located at the entrance of Camp-1 in Kutupalong, she said:

She told Fortify Rights what happened when she attempted to report the incident. She said:

Another Rohingya refugee man, 26, told Fortify Rights how he and three others were traveling from Jamtoli Camp-15 to Kutupalong refugee camp to attend his grandfather’s funeral on April 19, 2022 when the Bangladesh police stopped them at a checkpoint. He said:

He went on to describe how the police refused to let them go and beat him:

Although the police released them, they were too late to attend the funeral:

Another Rohingya man recalled how a police officer similarly stopped him at a checkpoint located outside Kutupalong refugee camp on April 8, 2022, while he was on his way to the market to buy food for Iftar, the evening meal to end the daily fast during Ramadan. He said: “I told [the police officer] I needed oil, onion, and chili for the mosque and requested to please be able to go buy some. He said, ‘No.’ He just turned me away, saying I can’t go.”

The Rohingya man later tried to clandestinely leave the camp:

“While flogging me, he called me a Chalarfuth [a derogatory term used in both Rohingya and Bangla languages],” the man told Fortify Rights. “I heard him saying that . . . I felt terrible when I was beaten.”

He also witnessed others being beaten by the police: “Many people were beaten on that day. I saw two or three other people beaten when I was there. When they beat a few people, others ran away. [The police] yelled, ‘Eat whatever you are provided in the camp. You are not allowed to move outside the camp.’”

Rohingya refugees who tried to circumvent the restrictions similarly faced beatings by the police. One Rohingya man who tried to leave the camp through a hole in the barbed-wire fencing told Fortify Rights how APBn officers beat him. He said: “Suddenly they called me [near the entrance gate of the camp] and beat me very badly with a stick . . . I was hit ten to 20 times with a police [baton] . . . I was beaten on my backside.”

Fortify Rights previously documented how barbed-wire fencing that encloses most of the camp in Cox’s Bazar District contributed to loss of life and injuries during deadly fires in March 2020, as the fences obstructed those from fleeing the fires.

These restrictions on movement also affect the livelihoods of Rohingya refugees, as illustrated by one Rohingya aid worker, 23, who lives and works for a humanitarian organization in the refugee camps. He told Fortify Rights:

Fortify Rights also obtained and reviewed two Bangladesh “movement permission” application forms from camp 15 and 16, whereby refugees must report their “date of leaving” and “arrival date” back to the camps. In some cases, authorities reportedly demand money from refugees in exchange for approved travel permission.

International human rights law protects refugees’ right to freedom of movement and authorizes governments to only impose regulations that are equally applicable to other non-citizens present within the country’s borders. Bangladesh is a state party to the International Covenant on Civil and Political Rights (ICCPR), which applies “without discrimination” to refugees and protects the right to freedom of movement. The U.N. Human Rights Committee has recognized that the ICCPR should apply “without discrimination between citizens and aliens,” including refugees.

The confinement of refugees is discriminatory and infringes on Rohingya refugees’ right to freedom of movement in contravention of international law, said Fortify Rights. Bangladesh authorities should prevent excessive securitization of the camps and the unlawful and arbitrary use of force against Rohingya refugees.

Bangladesh is also a state party to the Convention on the Rights of the Child, which under Article 37 provides that “No child shall be subjected to torture or other cruel, inhuman or degrading treatment or punishment.”

“The authorities in Bangladesh should halt the draconian restrictions on movement and allow refugees to travel between and outside the camps,” said Amy Smith. “The Rohingya in Bangladesh are refugees and genocide survivors, not prisoners.”