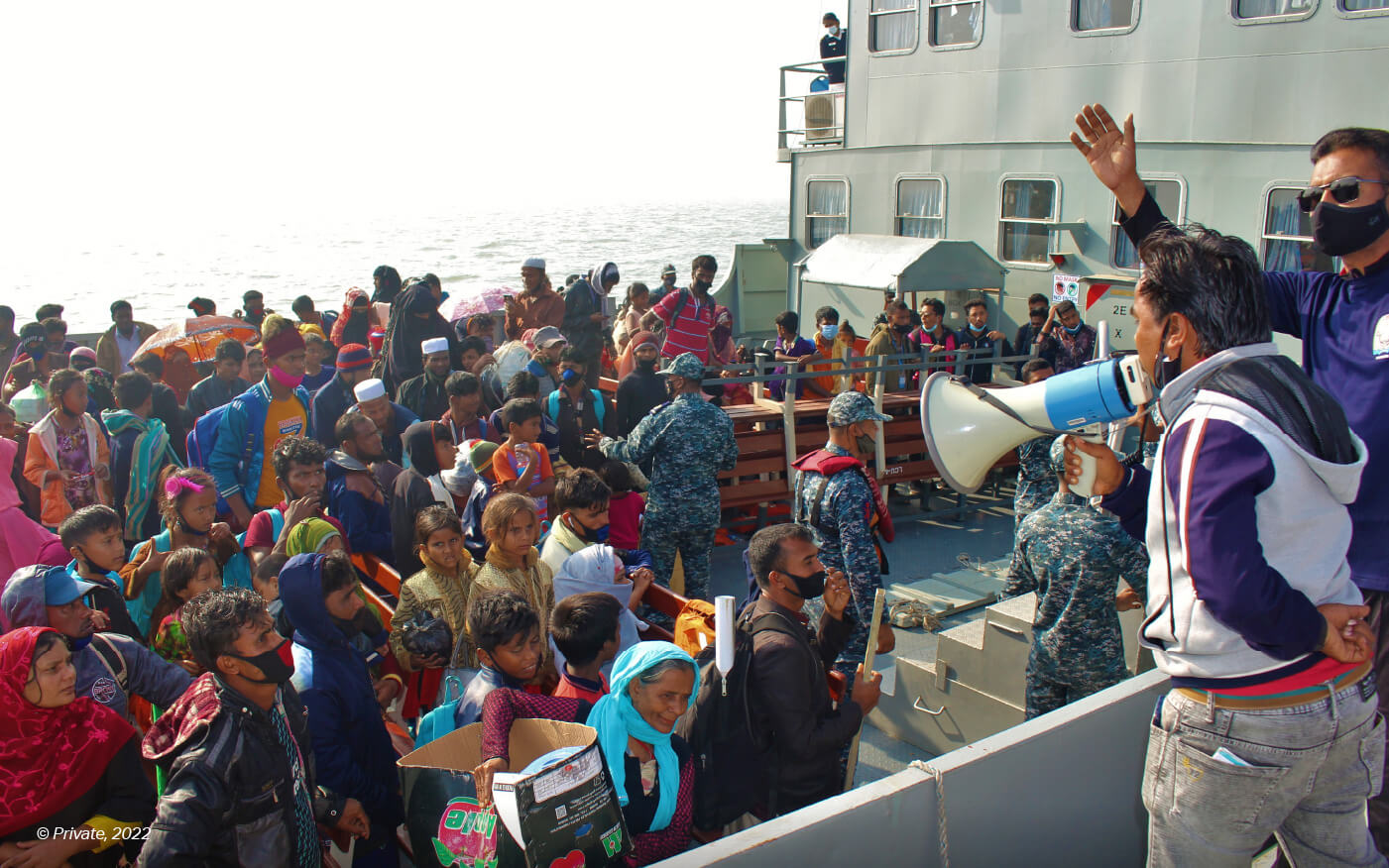 (BANGKOK, January 30, 2022)—The Bangladesh Government should prevent coercive and involuntary transfers of Rohingya refugees from mainland camps to the isolated and flood-prone island of Bhasan Char, Fortify Rights said today. Bangladesh authorities began a new round of relocations to the island today.

“Refugees have rights, and the Bangladesh government and U.N. refugee agency have a responsibility to ensure those rights and prevent abusive, coercive transfers to Bhasan Char,” said Ismail Wolff, Regional Director of Fortify Rights. “It’s cruel and inhumane to separate these families of genocide survivors. The government should cease any additional transfers to the island until all human rights and humanitarian concerns have been resolved and genuine consultation and informed consent is assured.”

The Government of Bangladesh reportedly relocated more than 1,000 Rohingya refugees from mainland camps in Cox’s Bazar District to Bhasan Char on December 18, 2021, and January 6, 2022.

Fortify Rights interviewed 10 Rohingya refugees in Bangladesh, including two on Bhasan Char and three Majhis who attended meetings with government officials regarding transfers to the island in December 2021 and January 2022. Fortify Rights additionally interviewed a Camp-in-Charge (CiC) government official, a local government representative from Nhilla Union, and a U.N. representative, and reviewed mobile-phone videos filmed by Rohingya refugees showing coercive practices by officials in the lead up to transfers.

In one case, in December 2021, Bangladesh authorities beat a Rohingya man and confiscated his family’s identity documents—which are needed to secure essential aid and services—and then forcibly transferred him to Bhasan Char, separating him from his wife and children. The government authorities allegedly accused the man of “obstructing” Rohingya people from moving to the island.

“I was shaking out of fear when they took my family’s [documents],” the man’s wife told Fortify Rights, adding that the authorities called her husband to an office in the camp on January 5 from where they then moved him to Chattogram (also known as Chittagong) before transferring him to Bhasan Char.  She said that when she went to see her husband at the local authorities’ office in the Cox’s Bazar District refugee camps, he told her that officers there had blindfolded him and beaten him.

“I saw my husband’s face was swollen from the beating,” she said. “I want my husband to come back home. I do not want to go to Bhasan Char.”

Coercive and involuntary transfers of Rohingya refugees to Bhasan Char violate an agreement signed on October 9, 2021by the Government of Bangladesh and the U.N. refugee agency (UNHCR) that guarantees all relocations of refugees to the island will be “on a voluntary basis.”

An unpublished internal U.N. Joint Needs Assessment on Bhasan Char from January 2022, on file with Fortify Rights, cites concerns around the separation of families, the protection of refugees, and the lack of freedom of movement on and off the island for refugees. The assessment states: “Separated families are struggling to stay connected without access to and from Cox’s Bazar, family members that attempt the journey face risks to safety as well [as] arrest and detention without consistent access to legal services.”

The U.N. Joint Needs Assessment on Bhasan Char also notes there are unaccompanied and separated children on the island.

In another incident, on January 3 and 4, 2022, in the lead up to the authorities’ transfer of refugees to Bhasan Char on January 6, CiC officials and National Security Intelligence (NSI) officers met with Rohingya Majhis and pressured them to help move refugees to Bhasan Char in their respective camp blocks. A Mahji who attended the meetings told Fortify Rights the CiC demanded that they get people to relocate to Bhasan Char “by any means,” even suggesting that aid organizations will only operate on Bhasan Char and not in the mainland camps. Another Mahji, 45, who attended the meeting told Fortify Rights that the Bangladesh authorities threatened to deny Rohingya shelters or bamboo and other supplies for shelter repairs if they did not move to Bhasan Char, and threatened to destroy any shops being run by Rohingya in mainland camps.

“They [CiC] said that more pressure will come in the future,” one Mahji said. “This is how they threatened and pressured us to go to Bhasan Char.”

“Misleading Rohingya to believe the only way they will obtain basic needs and services is by relocating to Bhasan Char is a hallmark of coercion,” said Ismail Wolff. “These threats are needlessly terrorizing some segments of the refugee population.”

There are an estimated one million refugees from Myanmar in Bangladesh, the vast majority of whom survived Myanmar Army-led genocidal attacks in 2016 and 2017 and were long denied citizenship rights.

Bangladesh government officials have propagated a false narrative that international non-governmental organizations (NGOs) operating in Bangladesh are influencing the Rohingya to not return to Myanmar out of their own self-interest.

On condition of anonymity, a local government representative from Nhilla Union—an administrative body located in Teknaf in Cox’s Bazar District—referred to Rohingya as “miscreants” and told Fortify Rights: “The NGOs are influencing the Rohingya not to move to Myanmar. So, I strongly believe that Bhasan Char is the best option for the Rohingya.”

Representatives of aid organizations in Cox’s Bazar District shared documentation with Fortify Rights showing recurring threats, coercion, and intimidation against Rohingya refugees by CiC and NSI officers in the lead up to transfers of refugees to Bhasan Char in December 2021 and January 2022.

In another incident documented by Fortify Rights, on December 16, 2021, local authorities entered Blocks D1 and D2 in Camp-25 in Nhilla Union at around 2:30 p.m., distributed empty sacks to refugees, and ordered refugees to pack their belongings to move to Bhasan Char the next day. These demands were met with outrage and fear.

Fortify Rights obtained mobile-phone video footage taken on the scene by Rohingya refugees showing refugees shouting and throwing empty white sacks into the road in protest of the order.

A Rohingya man, 41, residing in Camp-25, told Fortify Rights: “If we go to Bhasan Char, we cannot go anywhere from there, and we don’t have any relatives there, nor can we communicate with our relatives, which means we are dead there.”

The authorities did not return to Camp-25 to force anyone to Bhasan Char; however, two days later, on December 18, the authorities transferred more than 500 Rohingya to the island from other mainland camps.

On December 19, the United Nations Special Rapporteur on the situation of human rights in Myanmar, Tom Andrews, concluded a weeklong visit to Bangladesh where he visited Bhasan Char. In his concluding statement, Mr. Andrews said, “Bangladesh’s commitment to voluntariness must be carried out at every level, meaning also that Rohingya are fully informed of conditions and there is no coercion.” During his visit to Bhasan Char, a Rohingya woman told the Special Rapporteur: “When we crossed the border from Myanmar into Bangladesh, we expected nothing and actually received support. When we moved to Bhasan Char, we were told we could expect a lot, and have received very little.”

Article 9 and 12 of the International Covenant on Civil and Political Rights, to which Bangladesh is a state party, protect the rights to liberty and freedom of movement, respectively. These rights apply equally to refugees, who should never be detained solely on the basis of their immigration status. Given the remote and isolated nature of the island, the inability of refugees to leave the island, and the severe restrictions on freedom of movement on the island, Bhasan Char is essentially an island detention center, Fortify Rights said.

“Rohingya refugees must have access to information about the island, including the details of the agreement between the government and UNHCR as well as follow-up assessments,” said Ismail Wolff. “UNHCR and Bangladesh must ensure refugees have all the information they need to make free choices and exercise their rights.”