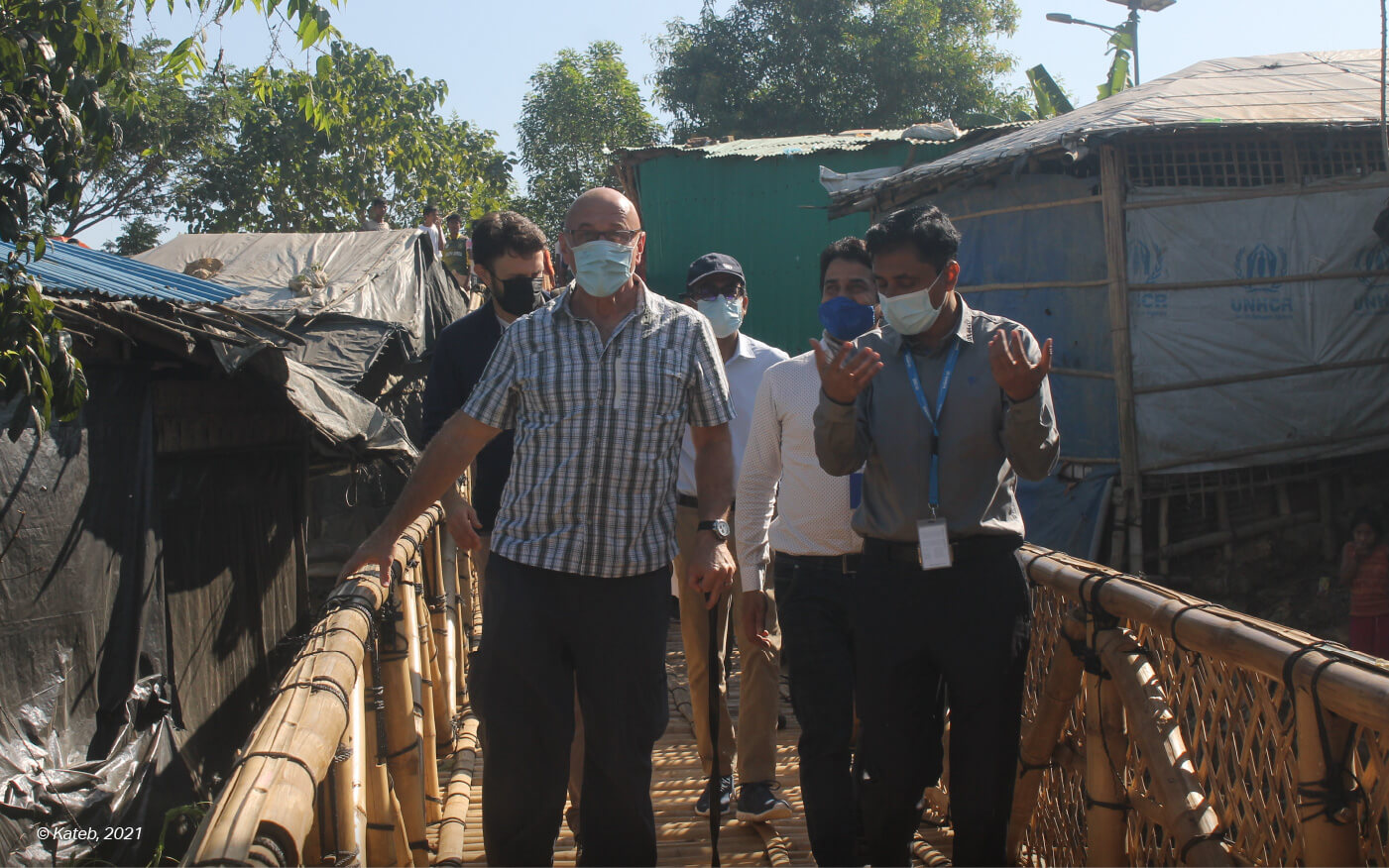 (COX’S BAZAR, December 20, 2021)—The Government of Bangladesh should ensure the right to freedom of movement, education, and protection for Rohingya refugees, said Fortify Rights today. On December 19, the United Nations Special Rapporteur on the situation of human rights in Myanmar, Thomas Andrews, concluded a week-long visit to Bangladesh to meet with members of the Rohingya-refugee community and Bangladesh government officials.

“The Rohingya have rights as refugees, and it’s in the interest of Bangladesh to better protect those rights, including the right to freedom of movement,” said Ismail Wolff, Regional Director at Fortify Rights. “Rohingya give thanks to Bangladesh but continue to face restrictions and violations of their basic rights and struggle to live with dignity.”

In a press conference in Dhaka yesterday, Special Rapporteur Andrews praised the Government of Bangladesh for protecting the Rohingya from genocide in Myanmar, acknowledging how the authorities “saved untold numbers of lives” in protecting Rohingya fleeing attacks in Rakhine State. He also acknowledged how the government “is a strong partner with the various international justice mechanisms to ensure the perpetrators of mass atrocity crimes in Myanmar are held accountable.”

The Special Rapporteur called on the Bangladesh government to protect Rohingya refugees’ access to education, livelihoods, and security and protection. He emphasized that Bangladesh should ensure any relocations of Rohingya refugees to Bhasan Char island are voluntary, and that “gaps” in services to Rohingya on the island must be addressed.

The Special Rapporteur’s findings will form part of his update to the U.N. Human Rights Council in March 2022.

During his visit, the Special Rapporteur met with refugees in the mainland camps in Cox’s Bazar District and on the remote island of Bhasan Char, where the government plans to relocate up to 100,000 refugees from the mainland camps, according to the Prime Minister’s Office.

Since May 2020, Bangladesh authorities have transferred at least 20,000 Rohingya refugees to Bhasan Char. Fortify Rights documented how some of these relocations were coerced or involuntary.

In his statement, the Special Rapporteur expressed concern about reports of coerced relocations of Rohingya to Bhasan Char. He said: “All of those [Rohingya] I spoke with on the island explained that they had been assured that there would be better education and health care services on Bhasan Char than what were available at their camps on the mainland, but this was not what they discovered when they actually got to the island.”

“Bangladesh’s commitment to voluntariness must be carried out at every level, meaning also that Rohingya are fully informed of conditions and there is no coercion,” he added.

On December 18, the Bangladesh authorities transferred more than 500 refugees to Bhasan Char. “I certainly hope and expect that all of the approximately 500 Rohingya who were reportedly relocated to Bhasan Char just yesterday did so voluntarily,” the Special Rapporteur said in his statement.

In the lead up to the transfers, Fortify Rights documented how local Bangladesh authorities in Camp-25—located in Nhilla Union, Teknaf—pressured refugees to move to the island, creating an environment of fear. Refugee witnesses in Camp-25 told Fortify Rights that members of Bangladesh’s National Security Intelligence, Camp-in-Charge officials, and local politicians told them that they had to go to Bhasan Char and would not be permitted to stay in the mainland camp. On December 16, government officials entered Camp-25 at around 2:30 p.m. and distributed empty sacks to refugees, telling them to pack their belongings as they would be moved to the island the next day. Refugees described to Fortify Rights chaotic scenes of panic in the camp and said some Rohingya, including women, were beaten for refusing orders, while local officials and men from the local community threatened some.

Despite the pressure, no refugees from Camp-25 were relocated to Bhasan Char.

The Government of Bangladesh must end all coercive tactics to pressure Rohingya refugees to relocate to Bhasan Char, and must protect their rights as refugees, said Fortify Rights.

Refugees on the island have faced beatings, threats, and ill-treatment by Bangladesh security forces as well as severe restrictions on the right to movement. According to media reports and interviews with people on Bhasan Char, Rohingya refugees seeking to travel off the island must request permission from the Bangladesh authorities in order to do so, and the authorities have only granted such permission once.

According to media reports, Bangladesh security forces reportedly arrested more than 250 Rohingya between June and September 2021 for attempting to leave the island without permission. Dozens of other Rohingya have died at sea while trying to escape the island.

Further reinforcing the government’s restrictions on the right to freedom of movement, a Memorandum of Understanding signed on October 9 by the Bangladesh Ministry of Disaster Management and Relief and the U.N. High Commissioner for Refugees (UNHCR) to facilitate aid to Rohingya refugees on the island includes an explicit provision restricting refugee movement from the island.

Rohingya refugees in the mainland camps also face tight restrictions on freedom of movement. In 2019, Bangladesh authorities began erecting fencing to confine hundreds of thousands of Rohingya refugees living in the mainland camps in the Cox’s Bazar District. The fencing includes checkpoints where extortion is common and it is part of a wider system of restrictions against the refugee population.

The Special Rapporteur reported that he had heard concerns that that the fencing was ineffective in achieving its stated purpose—to protect refugees from crimes—and that it instead creates protection concerns, including around certain dangers, such as fires. He encouraged the Bangladesh authorities to examine existing questions about the fencing.

Fortify Rights documented how barbed-wire fencing contributed to loss of life and injuries in deadly fires in March 2020, as the fences obstructed those seeking safety.

Bangladesh authorities should prevent excessive securitization of the camps, including by fencing, surveillance, or repressive tactics, said Fortify Rights.

International law and standards protect refugees’ right to freedom of movement and authorize governments to only impose regulations that are equally applicable to other non-citizens present within the country’s borders. The confinement of refugees on Bhasan Char and to fenced-in camps on the mainland are discriminatory and infringe on Rohingya refugees’ right to freedom of movement in contravention of international law.

“His murder was believed to be at the hands of the Arakan Rohingya Salvation Army, or ARSA,” said the Special Rapporteur, adding: “I have received credible reports that members of ARSA have killed, tortured, abducted, and threatened Rohingya refugees.”

“If there is no justice for Mohib Ullah, then people are at risk,” a Rohingya human rights defender in hiding told Fortify Rights. “There is no security for us [here].”

Among other findings and recommendations, the Special Rapporteur encouraged Bangladesh to ensure “robust third-country resettlement options for Rohingya refugees.”

The Bangladesh authorities and UNHCR should facilitate third-country resettlement as well as safe houses, and other protections for at-risk Rohingya human rights defenders and their family members under threat, Fortify Rights said.

“Bangladesh should work closely with UNHCR to provide protection for Rohingya human rights defenders and others facing security threats and intimidation in the camps,” said Ismail Wolff. “These efforts will also require robust backing and support of donor governments.”

The Special Rapporteur also addressed concerns regarding Rohingya and the right to education. On December 13, the Refugee Relief and Repatriation Commissioner issued a directive stating that all “home-based learning center[s]” and “private learning center[s]” must be shut down in the mainland refugee camps. Speaking of the decision, the Special Rapporteur said, “I am deeply concerned to have learned of a new policy, promulgated while I was here, that would close all private schools in the camps.”

The Special Rapporteur added: “Access to education will enable Rohingya to be ready for a sustainable return and reintegration into Rakhine State, Myanmar when possible. Moreover, education will provide Rohingya youth with opportunities that could deter them from negative coping mechanisms, reducing security vulnerabilities in the camps, and reducing security vulnerabilities for all.”