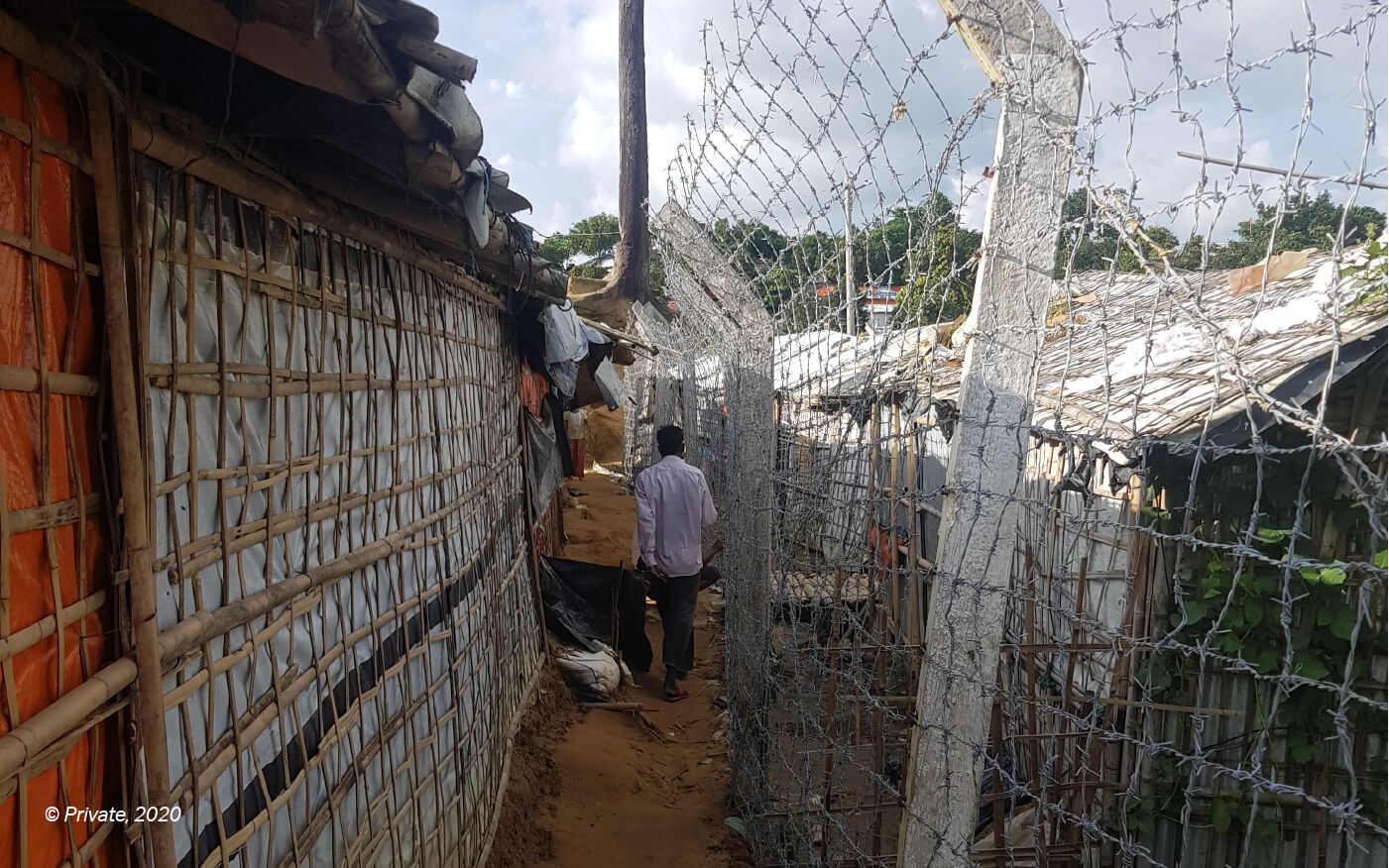 (BANGKOK, October 9, 2020)—The construction of barbed-wire fencing to confine hundreds of thousands of Rohingya refugees in Bangladesh violates their dignity, right to freedom of movement, and will complicate the delivery of vital services and humanitarian aid, said Fortify Rights today. In recent weeks, the Government of Bangladesh accelerated the construction of more than 17 miles (28 kilometers) of barbed-wire fencing around at least 25 interconnected refugee camps in Cox’s Bazar District.

“The Rohingya in Bangladesh are refugees, not prisoners,” said Ismail Wolff, Regional Director of Fortify Rights. “Refugees have rights. Dhaka should remove the existing fencing and protect the right to freedom of movement for all.”

According to aid-agency maps seen by Fortify Rights as well as firsthand testimony, fence construction around the Kutupalong-Balukhali Expansion Camp in Cox’s Bazar District is at least 90-percent completed. The overcrowded “mega camp” is host to more than 700,000 refugees, according to the U.N. High Commissioner for Refugees (UNHCR)—the U.N. agency mandated to protect refugees. Most construction has taken place in the past six weeks.

Bangladesh has intermittently erected fencing around refugee camps in Cox’s Bazar District since September 2019 when the government first announced plans to construct watchtowers, install video surveillance, and fence-off more than 30 Rohingya refugee camps. The Bangladesh Government says the fencing is in response to security concerns and to control the movement of Rohingya in and out of the camps.

There are nearly one million Rohingya refugees living in southern Bangladesh after fleeing persecution and genocide in neighboring Myanmar. The fencing is part of a wider system of restrictions on refugees’ freedom of movement, including checkpoints where extortion is common, said Fortify Rights.

“The fence being built is nearby my shelter, and [Bangladesh authorities] kept building during COVID. There are more [security forces] now in the camps,” a Rohingya refugee man, 22, told Fortify Rights in September. “I worry in the future if I leave the fenced area, I will be arrested. The authorities are putting pressure on our community to go back to Myanmar or Bhasan Char.”

The Government of Bangladesh continues to threaten to proceed with controversial plans to relocate an estimated 100,000 Rohingya refugees to the remote flood-prone island of Bhasan Char located in the Bay of Bengal.

In recent weeks, violent clashes in the camps in Bangladesh between rival gangs have left at least eight people dead and forced thousands of refugees to flee. Unknown perpetrators also allegedly abducted at least one Rohingya man in the camps.

“There is violence taking place here in the camp . . . [The clashing groups] have guns, many guns . . . and [they] fire them the whole night,” said a Rohingya man, 33, to Fortify Rights on October 4. “We are really afraid seeing the fencing, because [that means the] Bangladesh government is not going to let us move around.”

A Rohingya Mullah–an Islamic religious teacher–in the refugee camps told Fortify Rights about the violence in recent weeks, saying: “I am worried about violence. . . [The groups] have guns and sticks.”

Since 2012, the Government of Myanmar has confined an estimated 130,000 Rohingya to more than 20 internment camps in five townships of Rakhine State. Reflecting on the similarities between the situation for Rohingya in Myanmar and Bangladesh, a Rohingya woman living in the refugee camps, 25, told Fortify Rights:

We are afraid of the fence going up here in the camp [in Bangladesh] because the Myanmar government built barbed-wire fences on all four sides before the violence took place. After building the fence in Myanmar, many of our mothers and sisters were killed, and young children were cut and thrown into fires.

“We live in a chicken cage,” a 20-year-old Rohingya refugee man from Maungdaw Township in Myanmar told Fortify Rights, adding that restrictions in Bangladesh are increasing. “The government is banning us from moving around . . . There are checkpoints everywhere.”

“The camp is like a prison,” another Rohingya refugee man told Fortify Rights. “The only difference between camps and prisons is cement walls and wire fencing.”

Other Rohingya refugees told Fortify Rights of experiencing heightened distress and fear due to the fencing.

“We feel terrible seeing the fence here,” said a Rohingya refugee man, 36, from northern Maungdaw Township. “We feel sad because previously we could go outside the camp and go to the market.”

International humanitarian aid workers operational in Bangladesh also told Fortify Rights that the fencing will further restrict their work in the refugee camps, impeding Rohingya and local Bangladeshi populations from accessing medical facilities, medicines, and healthcare. Such restrictions are expected to create new challenges to respond to and mitigate the impacts of the COVID-19 global pandemic.

“It’s a disaster,” a humanitarian aid worker in Cox’s Bazar told Fortify Rights. “There has been no consultation with the humanitarian community about how the fence will affect the [humanitarian] response.”

“We are struggling to deal with all the government restrictions on us here,” said a director of an international humanitarian organization working in Cox’s Bazar District. “It is much more difficult than other contexts I have been in.”

A U.N. aid worker who spoke with Fortify Rights estimated that the government’s re-drawing of camp boundaries with the new fencing perimeters would result in the relocation of up to 10,000 people in the already overcrowded Kutupalong-Balukhali Expansion Camp, raising additional concerns.

The Government of Bangladesh confirmed that the fencing is being instituted as a new “security measure” in addition to 24-hour monitoring of the refugee population. “[T]he Rohingya camps will soon have fences around them, 24 towers, and an adequate number of CCTV cameras will be installed,” said AKM Mozammel Haque, President of the Home Ministry’s law and order committee on September 8. “By these measures, their activities will be monitored 24 hours a day.”

Two CiCs in Cox’s Bazar confirmed to Fortify Rights that the fencing plan was ostensibly motivated by concerns around crime and security in the camps and that it was their responsibility to ensure implementation of the restrictions on movement.

“I heard that after making the fence there will be watchtowers,” a 34-year-old refugee man told Fortify Rights, saying he had seen the Bangladesh authorities constructing fencing around the camp where he lives.

Aid workers have long warned against the securitization of the refugee camps. An internal document from December 2019, on file with Fortify Rights and from a humanitarian coordinating group in Cox’s Bazar, states: “[T]he civilian and humanitarian character of the Rohingya settlements must be maintained. Any restriction on refugee rights, movement and access to basic services should be related to identified security risks, be proportionate, as well as be in line with relevant human rights law.”

Bangladesh is a state party to the International Covenant on Civil and Political Rights, which the United Nations Human Rights Committee has recognized applies “without discrimination between citizens and aliens,” including refugees. This includes the right to freedom of movement. While certain restrictions on freedom of movement are allowed under international law, including for reasons of security, restrictions must be provided for by law, strictly necessary for that purpose, and proportionate. The fencing and confinement of upwards of one-million refugees lacks a legitimate purpose under international human rights law and is neither necessary nor proportionate.