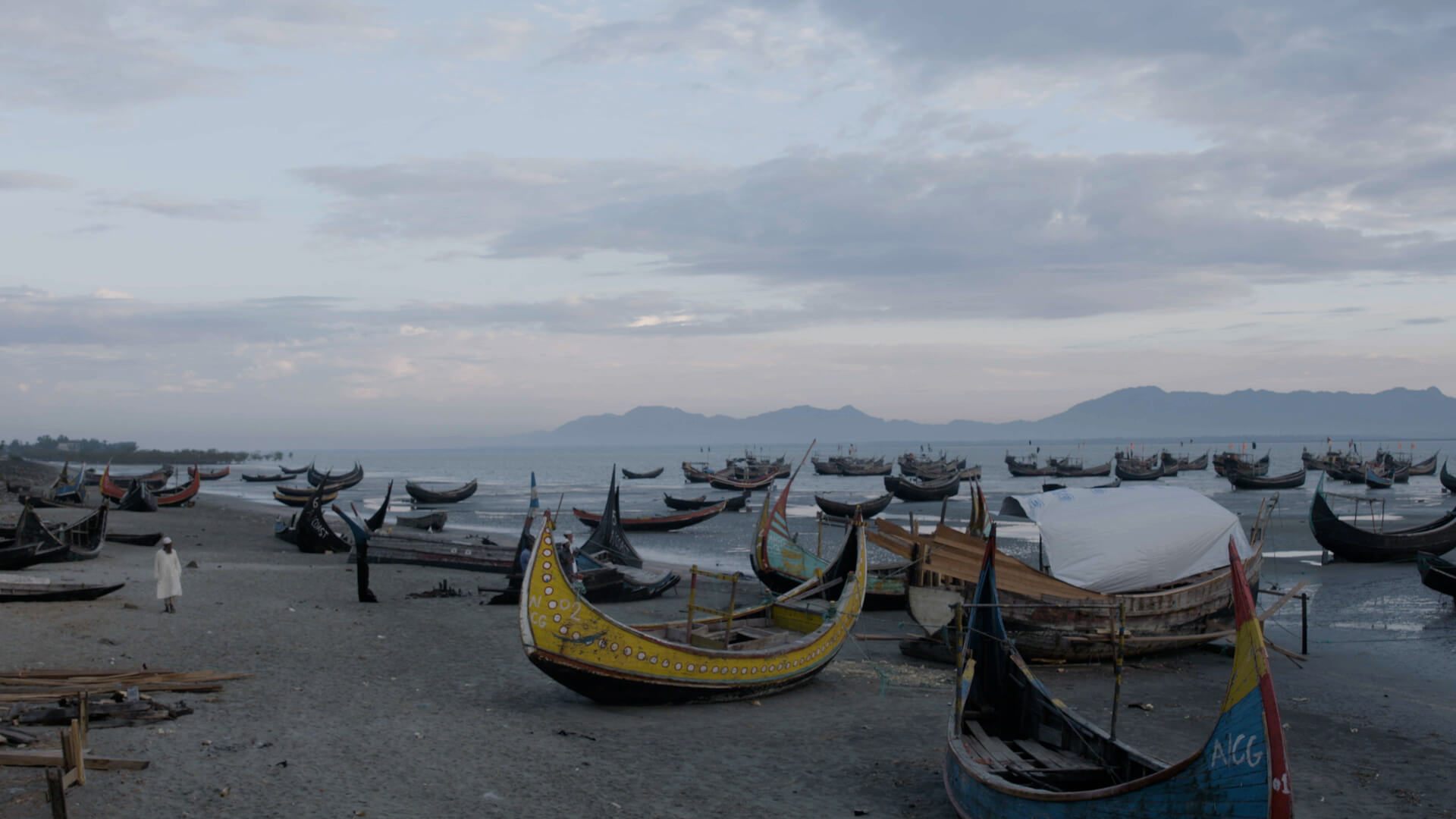 (COX’S BAZAR and BANGKOK, April 30, 2020)—The Government of Bangladesh should ensure the safe disembarkation of Rohingya refugees stranded on boats in the Bay of Bengal and investigate and prosecute perpetrators involved in killing and trafficking Rohingya refugees at sea, said Fortify Rights today. Hundreds of Rohingya are suspected to be stranded on at least two ships in the Indian Ocean. Testimony of Rohingya survivors recently rescued from a ship found adrift reveals killings, beatings, and deprivations of food and water by crew members, causing scores of deaths.

“Bangladesh should urgently deploy search and rescue missions,” said Matthew Smith, Chief Executive Officer of Fortify Rights. “The murderous operators of these ships are treating refugees as disposable property and that’s even more reason to rescue boats at sea. Bangladesh is obligated to investigate and prosecute human trafficking.”

On April 15, more than 390 Rohingya refugees were rescued from a ship adrift in the Bay of Bengal. The survivors, who departed Bangladesh, spent nearly two months at sea. The governments of Bangladesh and Malaysia have said they will not allow the disembarkation of Rohingya arriving on ships.

Those rescued had departed Bangladesh in late February or early March and spent nearly two months at sea. Fortify Rights interviewed three survivors, including one woman, who reported that crew members killed, beat, and deprived passengers of food and water. Survivors estimate that dozens of people may have died at sea.

“I saw many dead bodies of men who were pulled up from downstairs,” said “Atifa”—not her real name—a 21-year-old Rohingya woman originally from Maungdaw Township in Myanmar’s Rakhine State who survived the journey. “It was said that eight women died.” Describing the cause of the deaths, she said:

Noor was among those beaten by crew members operating the ship. “The crew beat me and others with an iron rod. It was not one or two strikes. They hit me 20 to 80 times.”

All three Rohingya survivors said the crew deprived them of food and water for stretches of several days.

“While waiting to go ashore in Malaysia, [they] starved us for five days,” said Noor. “They gave us nothing, not even a drop of water.”

“For ten days, we were given only water,” said Atifa. “No rice. For three days, they did not give food and water.”

“People died both from hunger and torture,” said “Abdul”—not his real name—a 20-year-old Rohingya survivor originally from Buthidaung Township, Rakhine State in Myanmar. “I threw dead bodies into the water with my own hands and without a funeral.”

Describing the quarters on the ship, Abdul said: “We men were in the lower deck of the boat and women were upstairs. There was at least some air in the women’s place. Many men died.”

Operators in the network required Rohingya to pay or produce large sums of money for the journey in advance or upon arrival.

The Government of Bangladesh should protect survivors and identify and prosecute those responsible for killing, beating, and trafficking Rohingya at sea, said Fortify Rights.

Bangladesh authorities have quarantined the group of rescued Rohingya for 14 days at transit camps in Kutupalong and Teknaf in Cox’s Bazar District, Bangladesh.

On April 16, the United Nations High Commissioner for Refugees (UNHCR)—the U.N. agency mandated to protect refugees—said in a statement that the Rohingya survivors are “all in weak physical condition, many are dehydrated and malnourished and in need of immediate medical attention.”

Fortify Rights believes that at least two other ships remain adrift at sea in the Bay of Bengal.

On April 22, Bangladesh Foreign Minister Abdul Momen told the media: “I am opposed to allowing these Rohingya into the country because Bangladesh is always asked to take care of the responsibility of other countries . . . We can no longer allow [in] any Rohingya.”On April 23, UNHCR called on states to avoid COVID-19 response measures that “result in the closure of avenues to asylum, or of forcing people to return to situations of danger.”

Earlier this month, on April 16, Malaysia pushed out to sea a ship of Rohingya refugees. The whereabouts of the ship and the well-being of its passengers remains unknown.

“Pushback” actions and policies violate the principal of non-refoulement, which prohibits the “rejection at the frontier, interception and indirect refoulement” of individuals at risk of persecution. Although neither Bangladesh nor Malaysia has ratified the 1951 UN Refugee Convention or its 1967 Protocol, the principle of non-refoulement is part of customary international law and is therefore binding on all states. Under this principle, all countries are obligated to protect Rohingya from being returned, including through returns that are informal, such as pushbacks out to sea.

There are reasonable grounds to believe the rescued Rohingya are survivors of human trafficking as opposed to smuggling.

Human trafficking and smuggling are distinct legal concepts. Under the U.N. Protocol to Prevent, Suppress and Punish Trafficking in Persons, the crime of trafficking has three elements: 1) the act of “recruitment, transportation, transfer, harbouring or receipt of persons,” 2) through the means of threat or use of force or other forms of coercion, abduction, fraud, deception, abuse of power or position of vulnerability, or the giving or receiving of payments or benefits “to achieve the consent of a person having control over another person,” and 3) a purpose of exploitation, including sexual exploitation, forced labor or services, slavery or practices similar to slavery, servitude, or the removal of organs.

In contrast, the offense of smuggling of migrants under the Protocol Against Smuggling of Migrants requires: 1) the procurement “of the illegal entry of a person into a State Party of which the person is not a national or a permanent resident,” and 2) for the purpose of obtaining “directly or indirectly, a financial or other material benefit.”

Evidence indicates the operators of the rescued ship of Rohingya were responsible for transporting Rohingya, gained control over their victims through threats and use of force, commanded large sums of money, and held their victims in conditions similar to slavery for the purposes of exploitation. These elements are consistent with human trafficking.

The U.N. Protocol obliges States to protect survivors of human trafficking, including through policies to provide for the “physical, psychological and social recovery of victims of trafficking in persons.” This includes housing, counseling and information, medical, psychological, and material assistance, and employment, educational, and training opportunities.

Authorities in Bangladesh should follow due process in investigating trafficking of Rohingya refugees in Cox’s Bazar District. The government should ensure all perpetrators of human trafficking and human rights violations are held accountable and provided with due process rights and trials that meet international fair trial standards.

The crimes against Rohingya survivors of the recently rescued boat are consistent with similar past situations involving Rohingya on boats at sea that were regarded as human trafficking by authorities in Bangladesh, Thailand, and Malaysia. In March 2019, the National Human Rights Commission of Malaysia (SUHAKAM) and Fortify Rights published the 121-page report, “Sold Like Fish,” based on a multi-year investigation into the human trafficking of Rohingya from Myanmar and Bangladesh to Malaysia from 2012 to 2015. Conditions documented in the report are similar to those unfolding now.

More than a million Rohingya refugees, many of whom fled genocidal attacks by the Myanmar military in 2016 and 2017, live in overcrowded refugee camps in Cox’s Bazar District, Bangladesh. Since September 2019, the Government of Bangladesh has restricted mobile internet communications in areas around the camp, limiting access to information. These restrictions coupled with the construction of fencing to confine refugees to the camps has heightened fear within the camp, particularly given concerns around COVID-19.

An estimated 600,000 Rohingya remain in Rakhine State, Myanmar and continue to face genocide and other international crimes as well as restrictions of basic rights, including freedom of movement and equal access to full citizenship rights. In January 2020, the International Court of Justice ordered Myanmar to implement provisional measures of protection for Rohingya to prevent acts of genocide and preserve evidence of such crimes.

“The ultimate culprit here is the Government of Myanmar,” said Matthew Smith. “If the Myanmar military and authorities ended their campaign of atrocities in Rakhine State and made genuine moves to protect the rights of all residents, this crisis would end.”